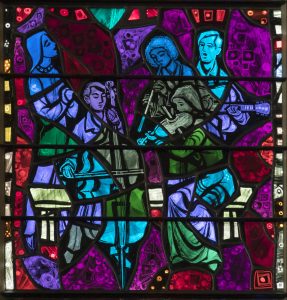 Music Sunday | May 22, 2022
My Heart is Inditing, G. F. Handel
In October 1727, a flooded Westminster Abbey delayed the Coronation of King George II by a few weeks. Handel was commissioned to compose anthems for the service, and the resulting four works remain immensely popular to this day. With a Chapel Royal choir of 47, operatic sopranos to bolster the singing of the boys, and an orchestra of nearly 160 players spread throughout the church, it’s hard to imagine the day going off without a hitch! Late in the Coronation service, Queen Caroline was crowned, and thus came the anthem My Heart is Inditing, drawing on texts from Psalm 45 and Isaiah 49 – more appropriate to the Queen than the King. It is an elegant anthem that makes mention of the King’s daughters, as well as the paternal and maternal roles of both King and Queen. The Motet Choir will be joined by the House of Hope Chamber Orchestra, conducted by Matthew Culloton.